I’m currently at the Gimpo International Airport waiting to board my flight to Beijing. (Well, I was when I was writing this.) The epicurean in me is incredibly satisfied, but my wallet is not feeling so hot.

My weekend was really jam packed. 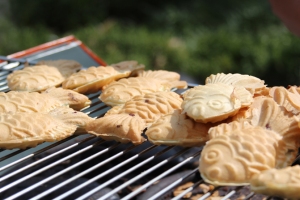 crispy pastries with red bean filling! it was so yummy!

To sum up my trip in one word – FOOD! I must have eaten twice my body weight in street food the last 5 days, and I’m not a very light girl. This isn’t even counting all of the restaurants we went to!

Everywhere we went, we had tons of street carts around offering an abundance of different foods to choose from. There were trucks set up outside that provided menus and seats; even restaurants opened up their shops to passer-bys could order something to go.

Beyond the pictures in this post, there was also sausages wrapped in French fries, vegetable/japchae filled fried dumplings, among many others.

Now that’s just the street food! We also went to some restaurants and yet again, was never once disappointed. I’m not a huge fan of spicy stuff, but after this trip, I have to say, my tolerance has definitely gone up.

8 different kinds of pork! korean bbq is so yummy!

We had 8 Colors Pork (Samyupsal), Korean BBQ, Bulgogi, some kind of octopus stew where we sat on the floor, and many others.

All of the café shops were open super late, so even as we were getting back around 11pm, they were still open – perfect chance to spoil ourselves with some Green Tea Bingsoo.

All in all, Seoul receives an A+ in food. There’s food everywhere! And the service is really great. Some things looked iffy, like live octopus (I tried really hard to convince myself to try it, but I just couldn’t), but most other iffy looking things, ended up tasting really good!

I really don’t know how Koreans stay so thin – I can’t do that. As much as I’ll miss the food, I’m glad I’m headed back to Beijing, exchange rate is way too heavy on my wallet.

fried goodies that were fried on the spot.

Conclusions:
– Food makes the experience. Try (almost) everything you can in a new place. You get to eat like a local and expand your taste spectrum!
– Splurge a little! Try it all. Clothes, you can buy anywhere, but certain food and certain tastes can only be found in certain places. Even if replicated, I doubt they’d be the same!

That’s all for now! If you’re my friend on Facebook, you’ll see a have a ton more pictures up, this isn’t even an eighth of the amount of food I consumed in one day.

Over and out,
kv. 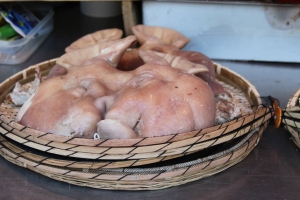 pigs’ face! didn’t try it, didn’t want to. i’m not entirely all that adventurous ):