baby ellie! this guy was quite rambunctious.

I don’t know about you, but I’ve heard horror stories about elephants/tigers/etc being mistreated in their parks for the enjoyment of tourists and visitors, so aside from looking for an elephant park that had a lot of fun activities, I also made sure to look for one that treated their elephants well.

Yes, Baan Chang Elephant Park (tripadvisor) was a bit pricier than other fellow elephant parks, but all their reviews were stellar, and they were very clear in disclosing why they chain their elephants during feeding times and at night (so they don’t fight for food/hurt each other, and so they don’t wander off, possibly hurting themselves). Overall, good vibes all around from Baan Chang Elephant Park. 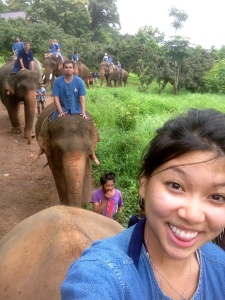 me and my crew lookin’ good all decked out in denim.

Our guide Chi picked us up from our hostel at 6:15 in the morning. We were exhausted! They also picked up 4 other people on the way, but it was mostly all of us. After an hour of deep slumber in the car, we arrived at the park and were given scrub-like denim outfits to wear. They weren’t very cute.

The reason for the uniform, as explained to us, was to palliate the elephants a bit and allow us to look a bit more like the people who worked at the camp. Makes sense. Also, we were clearly going to get very dirty, so I was pretty happy to change out of my clothes.

Chi guided us through the whole day, answering questions, showing us the proper ways to feed the elephants as to not hurt ourselves or the ellies and introducing us to baby elephants (my favorite part)!

the baby kissed me!

Most of the ellies at Baan Chang were rescues. Some were used in the logging industries, some were being hunted for their tusks, and others were circus rescues. Did you know that the seats that zoos put on the elephants’ back damage their spine? It’s not too heavy or anything, but the hard structure presses on their spine, and gives them back problems.

You could really tell from the way the mahouts interacted with their elephants that they cared for them, that there was a relationship present. My mahout’s name was Woy and my ellie’s name, well, I called her Ellie. After answering our questions, we proceeded to feed all the elephants with bananas and sugarcane.

walking through the maze of the elephants would scare a grown man. i think i took it rather well.

After giving a baby elephant some fried bananas that I snuck in, he wrapped his truck around my neck, and blew it! He had given me a little kiss! Probably the highlight of my day.

From there, we learned the commands to use while riding them, then took them on a walk, part of their daily exercise,  for about 2 hours, then ended the day with our elephants in the little lake, where we bathed them. My mahout thought it would be funny to throw elephant poop at me. Yolo, I guess.

Overall, it was probably top 3 experiences of my life, and I’m so grateful to have had this opportunity.

Til next time!
kimmi. 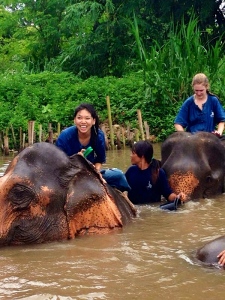 overall, a highly recommended way to spend your day.

There was an error retrieving images from Instagram. An attempt will be remade in a few minutes.