So the plane food was not the best stuff – greasy beef with cold udon noodles and fatty chicken with mushy rice.

Then I had really bland rice noodles at a Korean place on campus that literally had no flavor. Perhaps it was because I couldn’t read the menu at all, see below, but at that point, I was just angry. I was hungry, tired, jetlagged, and kind of feeling a bit lonely. I was only one that had arrived from BC, and some students had arrived from American University but were getting settled and doing their own thing, so it was just Kimmi! Trying hard not to fall asleep and trying to keep herself busy and think about all the positives and not the scary looking hut I had of a room. (Seriously, my dorm looks like where they’d film The Shining.)

Then for dinner, I had some greasy Beef Fried Rice that was not the hottest thing.

So basically, I went to bed apprehensive of the following days, scared that I made the wrong decision in going to Beijing, and kind of just pissed that I hadn’t had any good food to eat yet. LAME.

However, today, Jen, another Gilman scholar and I, saw some weird milk cans, and decided to be a little adventurous and try it! It was good! It was called sour milk, but it’s basically yogurt.

Then some friends and I wanted to get lunch and of course wanted to get dumplings. There was a stand that made them fresh on the spot and plopped them into plastic baggies. 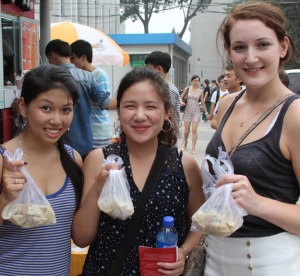 THEY WERE SO GOOD. Greasy as hell, but it didn’t taste like it, it just left a ton of grease on my hands.

So – so far, the day as been good, much better yesterday, and I’m in a better mood despite getting some really bad news this morning.

Things are turning around, and I certainly don’t think I won’t get sick of the food that soon.

1)   Don’t make judgments too quickly! I was feeling really shitty when I first got here, but things are starting to turn around and THAT IS GOOD.
2)   Trying new things aren’t so bad! If it looks totally sketch, than don’t go for it. Otherwise, if there are a BUNCH of people around the food (including international students), chances are, you’ll be okay.

That’s all for now! Video soon! Let me know what you think so far in the comments (;

Over and out!
-kv 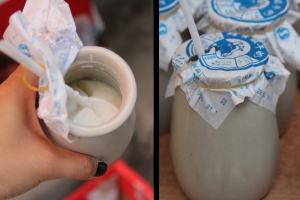 The containers were ceramic! numssss